History of the Parish of Our Lady of Dolours, Glasnevin

The first record of a Christian church in Glasnevin appears to be that of the monastery founded by St. Mobhi during the sixth century. Among the pupils at St. Mobhi’s monastic school were the saints Canice of Finglas, Colmcille (or Columba) of Iona and Comgall of Bangor.

In post-reformation times, Glasnevin belonged successively to the parishes of Coolock, Clontarf and Fairview.

In 1881, Fr. Keon, parish priest of Fairview, had a “temporary” church built on the site of the present Church of Our Lady of Dolours.  This was known as the 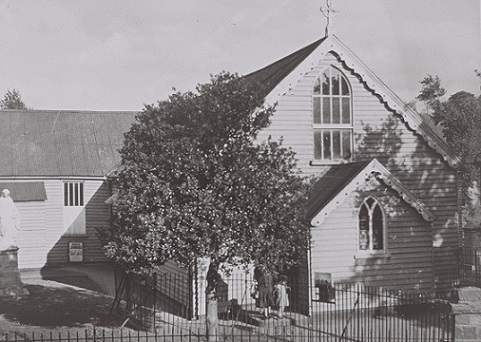 “Wooden Church” and the structure previously served as a church in Berkeley Road, and earlier still in Glasthule. Despite its “temporary” character, this building (which became the Church of Our Lady of Dolours) was to serve the Glasnevin community for almost ninety years, being extended during its early years.

In 1912, Glasnevin became a parish with Father (later Canon) Dudley as its first Parish Priest.   Born in 1852, Canon Dudley’s family had been settled in Dublin for 200 years (although he has been said to have described himself as being of Northern Ireland Protestant stock). Canon Dudley died in 1932, almost on the eve of the first Eucharistic Congress.  In 1924, he set up a temporary Chapel to serve Drumcondra and this was replaced in 1941 by the present Corpus Christi Church.

In addition to Canon Dudley the Parish Priests of Glasnevin have been:-

The temporary Church of Our Lady of Divine Grace in Ballygall was built in 1959, to be replaced by the present Church in 1988.

In 1969, the Wooden Church was demolished and the building of the present Church commenced soon after.  While building was in progress, a temporary church was erected in the grounds of the Bon Secours Hospital. 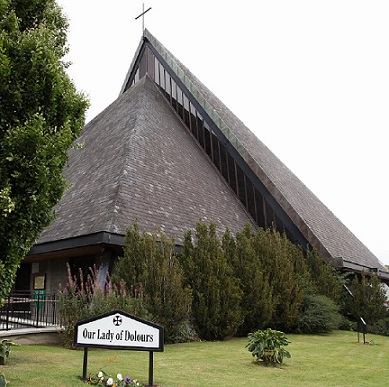 built church was dedicated by Archbishop Dermot Ryan on March 5th 1972.   The architect was Vincent Gallagher.

The Sanctuary Cross, which is suspended over the altar table, was painted by Patrick Pollen, and the Stations of the Cross, etched on tinted glass, are by Ronan Jacob.

Our Lady of Dolours Church was one of the first Catholic churches in Ireland to incorporate a community centre in its basement.

While the modern pyramid structure of the church may have given rise to some controversy when it was first built, it has very much become part of the sylvan and riverine landscape of Glasnevin village, and, of course the Meteorological Office situated at the top of the hill, somewhat echoes that architectural style.

In recent years, the benches in the nave have been replaced by chairs while the remainder of the Church has been refurbished with new benches. A new floor has been installed, and improvements have been effected to the lighting and heating of the church.   Also, access to the church and the community centre has been improved.

Besides the daily celebration in the Church of Mass, the regular celebration of baptisms, marriages, and funeral services, as well as the annual celebration of First holy communion and Confirmation ceremonies, a new liturgical feature in the parish calendar is the celebration of the “Do this in Memory” Mass during the school year for candidates for the First Holy Communion and their families.